This April, my friend Andrew and I traveled to New York City for the first time. We flew into Newark, New Jersey and were picked up by our friend Heidi…who we met on our trip to Greece. Funny how things worked out and I ended up gaining a new best friend on that trip. The three of us were super excited to explore the city together and also get to experience the city with Heidi, who was familiar with so much!

Our first evening there we wanted to see the iconic Times Square. It was everything that I had thought it would be; bright lights, people everywhere and traffic in every direction. We grabbed our first slice of New York pizza near Times Square and it was amazing. I think that first slice was my favorite of the whole trip. *Side note: We had pizza multiple times each day we were there…not even mad about it*

We headed over to Little Italy for dinner that night. The restaurant we chose was called La Bella Vita and was the epitome of Italian. There was even a door guy who called out to us as we were walking by to invite us inside, which we loved. The place itself was cozy and had delicious food and wonderful service.

After dinner, we checked out this speakeasy called Blind Barber, where you legit walked through a barber shop to get into the bar. It was definitely an experience, very crowded and extremely loud…so not really my scene. We ended up walking around until we found this bar called Wolfe Tones Irish Pub and ended up staying there until 4 AM if my memory serves me right. We danced and just had an amazing time in this little bar with some of our other friends. Sometimes you have the most fun in the place you least expect to!

Our next morning began with a much-needed brunch at The Standing Room. I really liked this place because of their service, the food wasn’t out of this world, but the atmosphere would definitely make me come back. We bought a coupon through Pulsd.com that included endless mimosas…which was either the worst or the best idea we had while there.  Anytime I travel I always make sure to check for local coupons in that area, it has been a great way to save some money while also enjoying a new city.

After getting nice and tipsy off of plenty of mimosas, we walked through the city until we reached The Museum of Sex. This place is so interesting and we really liked all that we learned while there…plus they had a bouncy castle with breasts called Jump for Joy, so what’s not to like? But you definitely need to have an open mind if this is on your list of places to visit while in NYC.

Up next: The Empire State Building! This is a must see for great views of the city, but you definitely have multiple options on places that offer awesome views.

We were able to meet up with a good handful of people from our trip to Greece that night out on the town. We went to a really fun bar called Phebe’s Tavern and Grill. They had an amazing DJ playing all of the best music, so we stayed there all night. It was definitely loud and crowded, but we were just happy to all be together for the first time in 6 months!

That Sunday we got to relax at home for the first part of the day…sleep off the past couple of nights! We headed into the city that afternoon to see Wicked. We were all super excited! I had seen Wicked once before, but it was the traveling show. It was such an amazing show to get to see there in New York. I wish we had more time to see even more shows while we were there, but even more of a reason to come back again someday 🙂

After the show, we headed over to the One World Observatory. Another view that’s amazing, but with such a story behind it. I think everyone that was old enough remembers where they were when the story came on the news of an airplane hitting one of the Twin Towers. To come and stand in the place where the towers used to stand tall was definitely a somber moment. We went right around sunset and were met with an amazing skyline and a beautiful sunset. I am very glad we made this a part of our trip.

Our last full day in NYC was jam packed with sight seeing lots of places we wanted to see. Up first was The Statue of Liberty and Ellis Island. We rode the ferry over to Lady Liberty first. She’s just as big as you think she’s going to be. It was also a little colder this day, so I felt very New Yorkish wrapped up in double jackets, a scarf and a coat! Ellis Island was next and I think I liked this place the best out of everywhere we went. They have it set up so you can experience what it would’ve been like to arrive there as an immigrant many years ago. We were on a pretty tight schedule this day, but I could’ve spent a great deal of time there looking at everything. 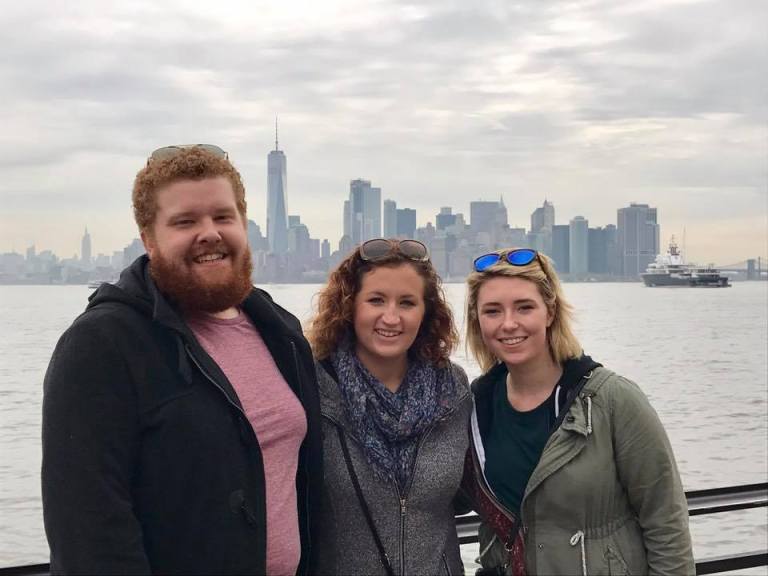 The rest of the day was spent checking out lots of different spots, riding the subway and exploring the city. 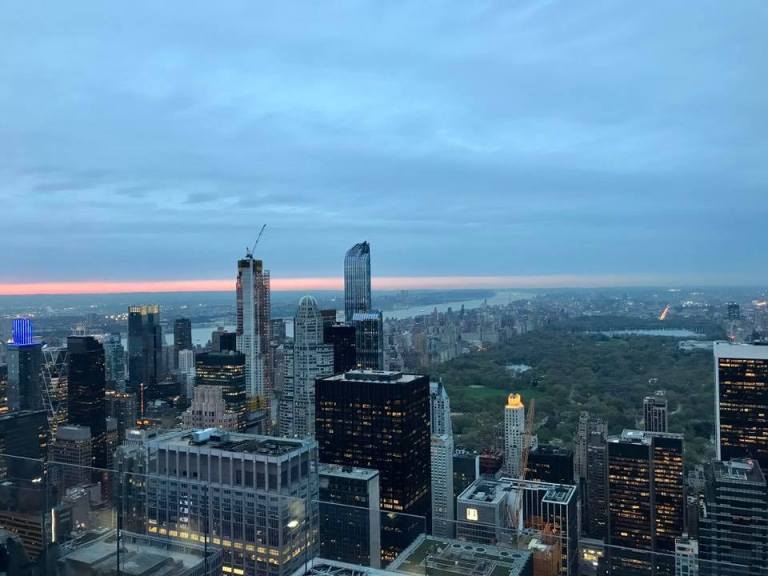 Our time in New York City flew by! I strongly believe that you could probably live here your whole life and still find something new to see/do/eat every day. I can’t wait to go back because I already have more things I want to do that I didn’t get a chance to. Have you ever been to New York? What’s something you recommend as a must-see item while in NYC?